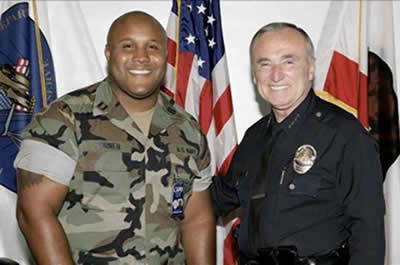 What the public needs to know is Christopher Dorner did in fact try and do this the right and legal way.  He even went to court and found out our legal system is filled with dishonesty, fraud and con artists like famed Judge David Yaffe

The tax payer needs to dig deeper into these stories as major media seems to ignore facts.  See the relationship  between Judge David Yaffe and Christopher Dorner and how Dorner did do the right thing and even went the proper legal path to be heard. What happens to good law abiding people who expose the corruption going on in California unfortunately is common. Since they can’t deny or refute the truth their only option is to slander or destroy the character
of the person coming forward with evidence. This is actually very common in court rooms and used by lawyers. Its not about justice or fair play instead about who is the better liar and con-artist.

The story in short:Dorner filed a complaint against an LAPD officer, who kicked a one of thepeople in the face. Dorner was dismissed from the LAPD as the result ofthe complaint. Dorner filed a petition for reinstatement. The petitionwas denied by corrupt California Judge David Yaffe.

The complaint against David Yaffe, Lee Baca, and others involved in the
case of Richard Fine was filed with the US Attorney Office in Los Angeles.
The US Attorney refused to take any action, or even confirm receipt of
the complaints.

The problem and scam is simple, people report crimes and violations to proper authorities however these same agencies fail to investigate of file the complaints attempting to pretend they never took place. When the public commits crimes they act, however when they or those involved with them commit crimes nothing is done.

If Christopher Dorner is called a Killer Cop, what do we call police who kill unarmed citizens and victims. Do we send out legions of police to hunt them down? The double standards of who can kill and who is prosecuted for killing makes no sense

Watch the video below which obviously has proof in the audio reports by media, the false statements made by police and the actual police audio from
radio calls

What happens when Police don’t do the right thing? When you do the right thing, come forward with evidence of crimes and violations of our rights. How do people explain police actions of shooting cars and people who had no resemblance to Christopher Dorner or his vehicle.