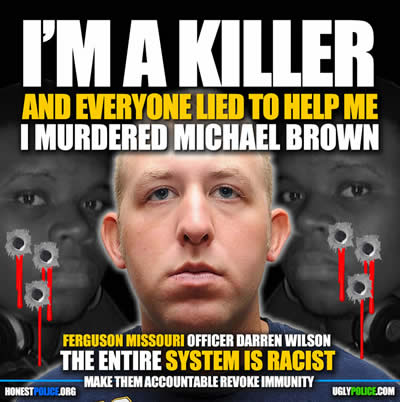 NEW VIDEO DOCUMENTARY EXPOSES THE RACISM, LIES AND HOW THE COURTS MANIPULATED THE TRUTH TO HELP A KILLER COP GET AWAY WITH COLD BLOODED MURDER
On Amazon Prime You Tube Stranger Fruit: What Really Happened To Mike Brown In Ferguson? | SXSW 2017

Correspondence to the Department, including the Attorney General, may be sent to:

The Department may be contacted by phone at the following:

Department of Justice components may also be contacted directly. Find their information on the Component Contact Information page.

Darren Brown in a liar and a killer who got away with murder because a racist police department and city government backed the image of police instead of prosecuting a killer cop. The media was used and abused to destroy the character of Michael Brown who was totally innocent. None of Darren Wilson’s testimony matches the crime scene or the coroners report. All the witness accounts were ignored in favor or one killer cop because he was white and they were all black.

The original testament of Michael Brown’s death was proven false through an investigation by a grand jury and the Obama Justice Department. According to The Slate, “the investigations found that Brown assaulted Wilson, tried to grab his gun, and was shot dead while advancing toward Wilson again.”

All the witness reports are mixed in terms of how the event played out. In The Washington Post’s article, “ballistics reports say that the officer ‘fired a total of 12 shots, two from his vehicle and ten on the roadway,’ in ‘three gunshot volleys.’ The autopsy found Wilson’s shots struck Brown ‘as few as six or as many as eight times,’ killing him. But, the report said, ‘There is no credible evidence to refute Wilson’s stated subjective belief that he was acting in self-defense.’”

According to The New York Times article, a St. Louis County grand jury decided in November not to indict Officer Wilson with the connection of shooting of Michael Brown.

The grand jury’s task was to determine whether there was probable cause to believe Officer Wilson should be charged with a crime. If so, which one. An indictment would have required nine of the 12 grand jurors to agree. The county prosecutor released evidence, such as forensic reports and photographs of transcripts of the proceedings.

Sen. Elizabeth Warren of Massachusetts, Sen. Kamala Harris of California, and billionaire Tom Steyer have said Mr. Brown was murdered — while the Justice Department hasn’t found any evidence that supports their claims.

The Justice Department found the popular narrative was wrong — according to witnesses that were deemed credible, even some of whom testified reluctantly. The department produced a comprehensive report, recalling the events of what happened, which makes the senators’ statements even more surprising.

So the question still stands — was Michael Brown murdered? More

The unknowns of the Michael Brown case